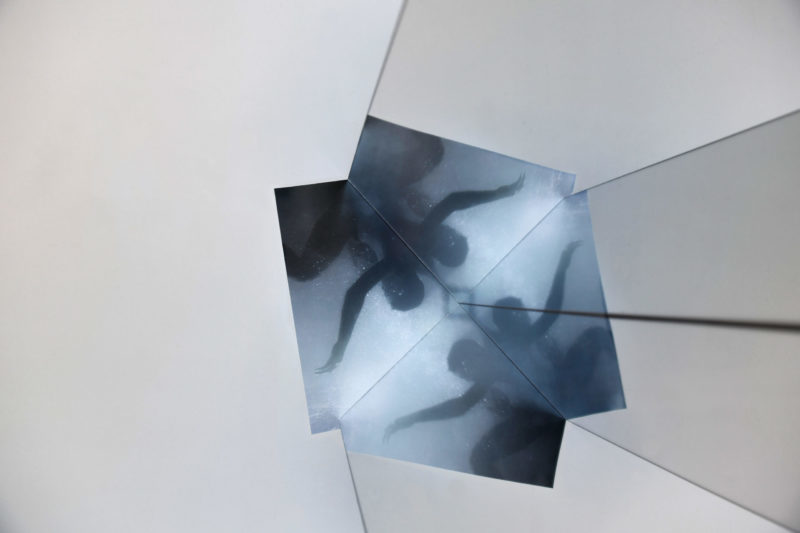 “Meristà” is the new exhibition that will open at Casa Testori on October 17, 2020 within the series dedicated to contemporary art called ‘Pocket Pair’.
It presents the work by visual artists Ilaria Turba and Fatima Bianchi and is curated by Giulia Zorzi

The exhibition triggers a dialogue between the artists through the different rooms of the house, taking into account the history of the place and the people who lived here. Drawing inspiration from personal and family life, Ilaria Turba and Fatima Bianchi rework their own memories, interweaving different languages.
Memory as a fertile and generative ground, a place of discoveries and revelations.
“Meristà” is a word we made up. It stems from ‘meristem’, a type of tissue found in plant that consists of undifferentiated cells capable of cell division. It is also a tribute to Giovanni Testori, great inventor of his own language. 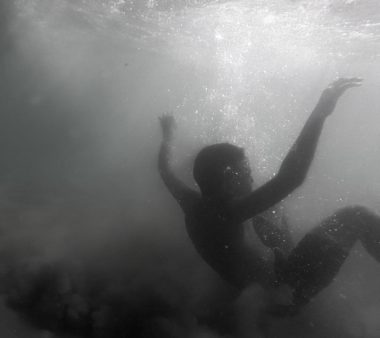 Fatima Bianchi’s work lies between art and cinema.
Screened for the first time, L’Ouvert (2020, 36 mins) is a film in which women share their experience of giving birth. Childbirth is evoked through the memory of the body; it is a rite of passage, symbolically represented by the act of opening up. Body, memory and story are connected, leading to a deeper meaning: our desire to be part of an endless, absolute space. An unlimited dimension that transcends time, where life and death meld and interpenetrate: the eternal becoming.
L’Ouvert will be accompanied by an installation.

With “Onomanzia” (Onomancy, 2017, 20 mins) the artist investigates her own name and the identities, cultures, symbols and stories it contains. An autobiographical journey on the importance of the meaning of our name.

A third work is still in the making. Based on the photographic archive of the Testori family, and realised on site, it will be presented in a video installation.

(the image above is a still from L’Ouvert) 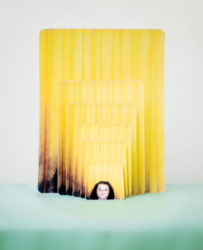 Ilaria Turba presents a selection from “JEST”, a series that originates from the exploration of the artist’s own family photo archive: five generations of photographs taken from 1870 to now are the starting point for a visual research in which photography is reality and fiction, play and action; images and objects arise from a photographic practice that interweaves other disciplines, offering the viewer a new experience.

In JEST, which means joke, the author works manipulating historical images in a game of repetitions, visual transformations and ever-changing manipulations, creating a constellation that combines private and universal elements.
JEST requires an active participation from the viewer and offers an opportunity to reconsider the personal archive of images (and prejudices) that each one of us carries with himself.

The exhibition is completed by a common work on the photographic archive of the Testori family: a selection of images presented in an intertwined reinterpretation by the artists.

Pocket Pair is a series of exhibitions coordinated by Marta Cereda launched by Casa Testori in 2018. It relates to an expression used in the game of poker: a player has two cards of equal value, and must bet on them. In the same way, the curators bet on artists of equal value, creating duo exhibitions that are shown on the ground floor of Casa Testori where they show their work, meet, visit each other, establish a dialogue

COVID-19: OPENING RECEPTION AND VISITS WILL TAKE PLACE IN TOTAL SAFETY AND ACCORDING TO CURRENT REGULATIONS TO PROTECT THE HEALTH OF VISITORS AND STAFF.

Casa Testori is a cultural hub in the outskirts of Milan, dedicated to the production and enhancement of contemporary art.

It is located in an early twentieth century villa on two floors, with a private garden, the house of writer, playwright, painter, art historian and literary critic Giovanni Testori (1923 – 1993), prominent figure of Italian post-war cultural life. His archive is kept here.

Testori’s literary works are characterised by linguistic experimentalism, featuring both lexicon and syntax that mix and fuse elements of the Lombard dialect with French and English. Religion is present in his oeuvre as a tragic tension to transcendence, marked by doubt, blasphemy and repentance. In 1972 he co-founded the theater now called Franco Parenti.

Fatima Bianchi (Como, 1981)
Fatima Bianchi is a director working between documentary and video art. She aims at creating new narratives based on a different temporalities. Reality is a starting point; she aims at generating a form of documentary that goes beyond simple representation. Her experimental approach is based on the perception of memory to create a sensitive view of the world. Parallel to her work as a director, she works on different films as editor.
Bianchi graduated from the New Academy of Fine Arts in Milan in 2008 and has been living and working in France since 2015. Her films and installations have been exhibited in various festivals and galleries including Visions du Réel (CH), Cinéma Vérité Tehran (IRAN), Open City Documentary (UK), Kinopanorama Rome (IT), ZagrebDox (CR), Filmmaker Festival (IT), Mediterranea 18 Young Artists Biennale (AL), Centre d’Art Contemporain de Briançon (FR), Les Instants Vidéo (FR), Fondazione Merz in Turin (IT), Spazio Forma in Milan (IT), Galleria Glogauair in Berlin (D). Her film Notturno was selected at the International Critics’ Week of the 73rd Venice Biennale. Among the awards and mentions she has received: First Prize Filmmaker Festival, First Prize Fondazione Libero Bizzarri, finalist at Premio Arte Contemporanea Premio Fabbri, and second finalist at Premio ArteVisione 2015, Sky Italia and Careof.

Ilaria Turba uses photography, video and animation as privileged media for the creation of works, installations, site specific projects and communication projects. Her works intertwine visual experimentation with other disciplines: social sciences, performing arts and oral history. She often works in collaboration with other artists, craftsmen and professionals. Identity and collective imagery, relationship between present and memory through objects, photographs, stories and places are the main subjects of her research, which includes community processes and workshops.

JEST is her first photobook, published by Berlin-based imprint Peperoni Books, featured in “How We See: Photobooks by Women” book and reading room curated by 10×10 Photobooks (NY), awarded at the Photo-Aperture Photobook Awards in 2019. In 2018 L’Atelier, space for contemporary art in Nantes hosted the first solo exhibition of JEST, an event that included a series of performances and installations; among these, the performance Eventails designed with Ambra Senatore and produced by CCNN.
Since 2018 Ilaria Turba is associated artist at the national theatre Le ZEF in Marseille, where she is developing “le désir de regarder loin” a three-year project on the city’s northern districts, with the partnership of Mucem, the museum of European and Mediterranean civilizations, that will exhibit the results of her work in June 2021. Part of the project has been selected for Manifesta13 -parallel du sud in 2020.
Ilaria Turba has presented her works in the following institutions and museums: Centre Pompidou, Paris (FR); Castello di Rivoli, Turin (I); Brooklyn Children’s Museum, New York (US); Museo della Triennale, Milan (I); Museo Fotografia Contemporanea, Milan (I); PAC-Padiglione di Arte Contemporanea).

Curator and organizer of cultural events.
Since 2002 she has devoted herself mainly to photography. Founder and director of Micamera, bookshop and photography gallery that since 2003 organizes exhibitions, talks and photography workshops. Micamera has become a point of reference in contemporary photography, both for the editorial selection and its cultural programme.

She has collaborated with PAC – Padiglione d’Arte Contemporanea, GAM – Galleria d’Arte Moderna, Fondazione Stelline, Museo di Fotografia Contemporanea di Cinisello Balsamo. In 2010 she was the first to bring Mark Steinmetz’s work to Europe, curating the South exhibition for the SiFest Festival; in 2019 she co-curated the retrospective exhibition dedicated to his work at Fotohof in Salzburg (A).
In 2011 she conceived Japanese Photobooks Now, an exhibition of contemporary Japanese photography through books curated by Ivan Vartanian at Le Bal in Paris. In 2012, together with Lorenzo Tricoli, she created Support Your Locals, an investigation project on the Isola district of Milan and the process of gentrification; disseminated through four free newspapers, presented in the district in an exhibition at the newsstand, Support Your Locals was then exhibited at the Lucca Festival and presented at international festivals.
In 2019 she was among the curators of Looking on. Sguardi e prospettive sulla nuova fotografia italiana at the MAR Museum in Ravenna, while the exhibition by Giulia Iacolutti Casa Azul, at the PAC – Padiglione d’Arte Contemporanea in Milan, scheduled for June 2020, has been postponed to June 2021. She collaborates with authors and publishers at the realization of editorial projects and occasionally writes.